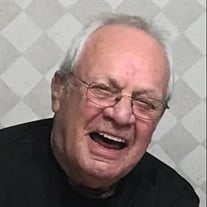 Aaron Albert Smith, 82, of DeWitt, passed away on August 25, 2020. He is survived by children Su’Aaron Travis (Ralph) of DeWitt, Eddy Hord (Katie) of Stuttgart, Kim Hord Seale (Spencer) of Lee’s Summit, MO; grandchildren Tucker Allen Travis of Dallas, TX, Elliott Seale (Bekah) of Wichita, KS, Zach Aliosio-Seale (Marianna) of Los Angeles, CA, Lauren, Hagen and Addison Hord of Stuttgart. He is also survived by nieces, nephews and numerous friends. Besides his parents, Albert was preceded in death by wife Sue C. Smith, son T. Allen Smith, son Joel C. Smith, and wife Nancy Hord Smith; sister, Darlene Dupslaff Leslee. Albert was born January 31, 1938 to Thadys Bert and Lillian Irene Grandgeorge Smith in Almyra, AR. Albert grew up on the farm and flying service. His Dad, Uncle Hartley and Butternut Jones started the first flying service in Arkansas County - Smith & Jones Flying service. He developed a passion and a natural talent for flying at an early age. At 19, Albert fell in love with Carolyn Sue Cooper, also 19, and eloped in Indianola, Mississippi on November 23, 1957. Albert served in the National Guard and was stationed at Fort Chaffee in Fort Smith, AR. Albert farmed for 15 years before he started Double “A” Flying Service in 1972 with his good friend, August Prange. Later, he became the sole proprietor, successfully operating the business and crop dusting until 2001. Sue passed away July 28, 2001. Albert found love again and married Nancy Hord on June 14, 2008. Albert became a member of DeWitt-St.Charles Hunting Club in 1965, where he served as President for 10 years. Albert was a member at First Baptist Church of DeWitt. Albert became known as Big “A”, a nickname given to him by his grandson Tucker, and soon many addressed him by that as well. Albert was well known and loved by everyone that ever met him. He had a quick wit, a way with words, and often summed up a situation with one line. He could light up a room with his smile and laugh. Albert was gentle, kind and patient. He respected and treated everyone the same, whether you were the janitor or the president. He was generous and thoughtful, never proud or boastful. Funeral services will be 10:00 a.m. Saturday, August 29 at First Baptist Church with burial to follow in Cedarcrest Memorial Gardens by Essex Funeral Home. COVID-19 guidelines will be observed at the funeral. The funeral will be live streamed on Facebook at FBC DeWitt. The family asks that memorial donations be sent to First Baptist Church, 322 W. 1st St., DeWitt, AR 72042.

The family of Mr. Aaron Albert Smith created this Life Tributes page to make it easy to share your memories.

Send flowers to the Smith family.