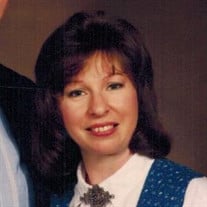 Beverly Louise Hawkins Watkins passed away on January 9, 2022, at her home in Conway, AR, with family by her side. Beverly was born in Mountain Home, AR, on July 28, 1952, and grew up in Heber Springs, AR. She married Donald Ray Watkins on September 4, 1976. They lived in various places in Arkansas until they settled in Conway to raise their children. From an early age, Beverly appreciated beautiful things and the aesthetics of her surroundings. She had a knack for style that she expressed through fashionable clothing and decorating her home; her seasonal décor left friends and family amazed every year! Also a talented artist, Beverly took pleasure in playing the piano and creating beautiful paintings. Her interest in collecting dolls, a hobby shared with her mother, continued to be loved throughout her life. Ouachita Baptist University is where Beverly began her college career. Studying Home Economics first and later studying English at the University of Central Arkansas, she proved herself to be an intelligent, academic woman. Teaching English was her passion and she shared a mutual love with her students. Beverly enjoyed being a favorite aunt among her many nieces and nephews but was most proud when she and Donald were able to adopt their own children. Joshua Ryan Watkins was adopted in July 1994 and six years later, the family traveled to China to adopt Kaitlyn Elizabeth Nan Wei Watkins. Beverly was a supportive, loving, and encouraging mother. Watching her children grow up gave her the greatest joy. Beverly is preceded in death by her parents Ralph and Lyla Hawkins and her brother Clinton Hawkins. She is survived by her husband Donald Watkins and children Josh (wife Breyanna) and Katie Watkins, her sister Angela Huenefeld (husband Paul), sister-in-law Mary Ellen Hawkins (husband Clinton), and many nieces and nephews. Visitation with Beverly’s family will be on Thursday, January 13 at 1:00 pm and service at 2:00 pm at Essex Funeral Home in DeWitt, Arkansas. The family requests that memorials be made to the Gladney Center for Adoption in Fort Worth, Texas.

Beverly Louise Hawkins Watkins passed away on January 9, 2022, at her home in Conway, AR, with family by her side. Beverly was born in Mountain Home, AR, on July 28, 1952, and grew up in Heber Springs, AR. She married Donald Ray Watkins on September... View Obituary & Service Information

The family of Mrs. Beverly Louise Hawkins Watkins created this Life Tributes page to make it easy to share your memories.

Send flowers to the Watkins family.