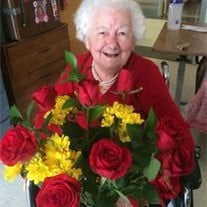 To those of you who knew Bonnie, or Miss, or Mama Bonnie, as she was known by her many "adopted" kids...Know how much she loved us all.   Bonnie was born on November 20, 127 in Checotah, OK and passed peacefully on February 24, 2017 at the age of 89.  She was one of 13 children born to Bertha and Neil Buie.  They later moved to Little Rock, Arkansas where she went to high school and worked at the old Levi Factory.  She married Leonard Green in 1950, moved to Bayou Meto and a had two boys and a girl, and called that home that her home for over 59 years.   While her kids were in school, she worked in the home and had a tremendous talent for growing a garden.  At least half an acre every year in tomatoes, corn, potatoes, lettuce, radishes, onions ... you name it, she could grow it ... and cook it too.   When everyone grew up and moved out, she tried several jobs outside the home, but loved being a greeter at Wal-Mart in Stuttgart.  No one got past her without a hug.   She lived the last few years of her life at the DeWitt Nursing Home, where she received good care from kind and compassionate staff, doctors, nurses, and aids.   Bonnie was predeceased by her parents, mother Bertha Buie, father Neil Buie, husband Leonard Green, son Tommy Green, and 3 brothers and 8 sisters.   She is survived by her loving daughter Kathy Green and son Ronnie Green and wife Marcia; granddaughter Bonnie Charlotte Hardwick; grandsons KC, Guy, and Justin Green; four great grandchildren; and one sister Doris Jean Buie.   Bonnie was a good and kind woman, always willing to help in a time of need.   She will be greatly missed and remembered by those who loved her dearly.   The family would like to extend their heartfelt gratitude to Ken Small, and sincere appreciation to the friends that have been an extended family to Bonnie at DeWitt City Nursing Home.   Visitation will be February 26 from 4-6 p.m. at Essex Funeral Home. Funeral services will be 10:00 a.m. February 27 at Essex Funeral home chapel with burial in Bayou Meto Cemetery by Essex Funeral Home.  www.essexfuneralhome.com

To those of you who knew Bonnie, or Miss, or Mama Bonnie, as she was known by her many "adopted" kids...Know how much she loved us all.   Bonnie was born on November 20, 127 in Checotah, OK and passed peacefully on February 24, 2017 at the... View Obituary & Service Information

The family of Mrs. Bonnie Ray Buie Green created this Life Tributes page to make it easy to share your memories.

To those of you who knew Bonnie, or Miss, or Mama Bonnie, as...