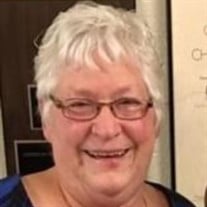 As I float around the river’s bend, I know who I’ll meet at the journey’s end. On September 28th, 2020 Carolyn Danner joined RD for that next boat ride. Carolyn was born April 26th, 1949 in DeWitt, AR to Doyle and Billie (Ragsdale) Harrison. She was a 1967 graduate of DeWitt High School and in March of 1969 married the love of her life, Ronnie Danner. Obtaining her Bachelor’s of Science from The University of Arkansas at Monticello, Carolyn spent 32 years in education working for the DeWitt School District. She began her career in 8th Grade English before moving to her true calling in Health and Physical Education, spending the early years of her career coaching girls basketball. Carolyn impacted the lives of more than 3,000 students and athletes in her years as a coach and educator. In her spare time, Carolyn loved to spend her days hunting and fishing with Ronnie. She was an avid deer hunter and loved fishing. She loved to catch crappie and catfish and then picking on Ronnie when she caught the most fish. For several years she spent her summer days playing softball in the local adult league and was an umpire for the youth league in DeWitt. She enjoyed umping Buddy League baseball for several years including the three years that her son Dustin played in that league. She loved travelling the state watching Dustin play high school baseball and football. Later on, Carolyn continued her sports travels when her grandchildren began playing youth and school sports. Carolyn was preceded in death by her husband of 47 years, Ronnie Danner and her parents. She is survived by her son Dustin (Heather) Danner and two grandchildren Ethan and Lindsay Danner, all of DeWitt. She is also survived by sisters, Beverly (Bo) Scroggins and Gay Harrison, both of DeWitt, brother Doyle (Shirley) Harrison of Judsonia, and sister-in-law Paula Kinnard of Mamuelle and DeWitt. Along with a host of nieces, nephews, and cousins both grand and great. Visitation will be held Wednesday September 30th from 5:00-7:00 at Essex Funeral home in DeWitt. Graveside services will be held Thursday October 1st at 10:30 at DeWitt Cemetery.

The family of Mrs. Carolyn Jean Harrison Danner created this Life Tributes page to make it easy to share your memories.

As I float around the river’s bend, I know who I’ll meet at the...

Send flowers to the Danner family.