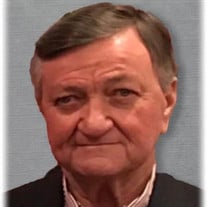 Charles Wayne Mannis, 72, of Conway, Arkansas passed away on October, 26, 2021. Charles was born on August 29, 1949 in Dewitt, Arkansas to Freddie (Buddy) and Evon Mannis. Wayne was married to his loving wife of 54 years, Dorothy Davis Mannis, on September 1, 1967 in DeWitt, Arkansas. Wayne was a pioneer in the agriculture industry. As an entrepreneur he researched and developed sustainable soil and agriculture solutions that are being utilized throughout North America. Wayne’s passion was serving and meeting the needs of all those he met. Wayne also serviced his community as a board member of Centennial Valley POA His is preceded in death by his father Freddie Mannis Sr. and Brother Eddie Mannis. Those left to cherish his memory is his wife Dorothy Davis Mannis, his mother; Evon Mannis, his sons; Derrick Mannis (Jennifer) of Greenbrier, Arkansas and Bradley Mannis (Mary) of Argyle, Texas, his daughter; Pam Henry (David) of Conway, Arkansas, his grandchildren; Jakob Henry, Ryann, Baron and Charlott Mannis, Emily Blankenship, his sister; Carol Paxton of Dewitt, Arkansas and his brothers; Freddie Mannis of Dewitt, Arkansas, Raymond Mannis of Dewitt, Arkansas and Derrell Mannis of McGehee, Arkansas. There will be a visitation on Thursday, October 28, 2021 at Roller McNutt Funeral Home in Conway, Arkansas from 6:00P.M. until 8:00P.M. Funeral Services will be at Essex Funeral Home on Saturday, October 30, 2021 at 2:00 P.M. with a visitation one hour prior. Tony Davis and Bradley Mannis will be officiating. Pallbearers will be Billy Watkins, Jakob Henry, Derrick Mannis, David Henry, David Griffin and Baron Mannis. Honorary Pallbearers will be William Palsa, Mike Jacobs, Scott Hinton, Rob Scott, Walter Fisher and Charlie Cox.

Charles Wayne Mannis, 72, of Conway, Arkansas passed away on October, 26, 2021. Charles was born on August 29, 1949 in Dewitt, Arkansas to Freddie (Buddy) and Evon Mannis. Wayne was married to his loving wife of 54 years, Dorothy Davis Mannis,... View Obituary & Service Information

The family of Mr. Charles Wayne Mannis created this Life Tributes page to make it easy to share your memories.

Charles Wayne Mannis, 72, of Conway, Arkansas passed away on...

Send flowers to the Mannis family.