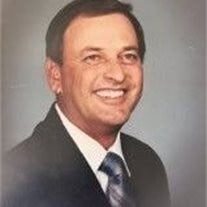 Darrall Alan Richter (D.A.), age 77, of Hot Springs, AR passed away on January 4, 2015 at his home. D.A. was born in Gillett, AR on November 20th 1937. He is preceded in death by his parents, Theodore Otto and Ruby Faye Moll Richter and an infant sister. He is survived by his wife of 58 years, Annetta Irene Robinson Richter, two children Wade Richter of Gillett and Kim Rieve of Sheridan, sister Linda Thompson of Hot Springs, his four Grandchildren Craig Richter, Clay Richter, Lauren McDonald and Brandon Rieve as well as four great grandchildren. He is a college graduate from U of A Fayetteville and received a Bachelors in Agri Economics. He continued his education toward a master's degree but was called from the National Guard for service. He began his career in Star City as an extension assistant with the Arkansas agriculture extension service. He raised his family in Gillett, AR where he spent his life farming. Darrall served on many boards: The Boards he held were: PCA, Federal Land Bank, Stuttgart Grain Drier, Gillett School Board, Board of Director of Planters and Merchants Bank. President of the Farmers and Business Men's club. He was Farm Family of the Year in 1974. He also held several church offices and was President of the cemetery board. He was instrumental in the building of HUD housing in Gillett and getting the ground water system placed in Gillett. After his retirement he and his wife, Netta moved to their lake home in Hot Springs, AR. D.A. was a member of St. Paul's Lutheran church in Gillett and attended First Lutheran Church in Hot Springs. The Service will be held at St. Paul's Lutheran Church on Wednesday January 7 at 11:00 am with graveside service immediately following at Gillett Cemetery. A visitation and reception will be held after graveside at St. Paul Lutheran Church. Everyone is invited to attend. In lieu of flowers memorials can be made to Gillett Cemetery Association. PO Box 124, Gillett, AR 72055

Darrall Alan Richter (D.A.), age 77, of Hot Springs, AR passed away on January 4, 2015 at his home. D.A. was born in Gillett, AR on November 20th 1937. He is preceded in death by his parents, Theodore Otto and Ruby Faye Moll Richter and an infant... View Obituary & Service Information

The family of Darrall D. A. Richter created this Life Tributes page to make it easy to share your memories.

Send flowers to the A. Richter family.