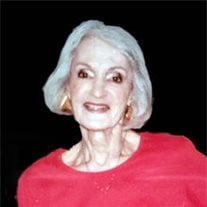 Edythe Lumsden Smith, or Medie, as she was known to family and friends, passed away on March 10, 2017, in Fayetteville, AR. Edythe was 90 years old. At age 19, Medie boarded a train to California to marry her hometown beau, Francis William Smith, who was stationed there in the Army after his service in World War II. It was while living there that she learned to cook enchiladas and tacos, which were often requested by friends and family.  Medie was such an outstanding cook that her children's friends still fondly remember her yeast rolls and fried pies from their days growing up in Arkadelphia, AR.  Medie was born on July 14, 1926 in Bayou Meto, AR and was a proud Arkansan and descendent of Revolutionary War patriots. Her parents, Louella Webb Lumsden and James Walter Lumsden, were rice farmers.   A beloved mother, mother-in-law, grandmother and great-grandmother, Medie had a quick wit and wry sense of humor which she kept until the end of her days.   Medie loved animal print on any surface and could create or alter most anything on her sewing machine.  She had a green thumb, once rooting a gardenia in a paper cup, which has now grown to over 7 feet. Of all the things Medie loved, her greatest joy was Razorback Baseball whether viewed on her television, listened to on the radio or best of all, at games at Baum Stadium. Medie is survived by her children Gayle Porto, Marc Smith, Lydia (David) Parker, Nolen (Michelle) Smith and Neal (Terri) Smith. She is also survived by grandchildren Karen (Dave) Van Horn, Keith Lee, Marcus Smith, Nickie (Rob) Galloway, McKenzie (Mahlie Peregoy) Smith, Chris (Athena) Parker, Lee Parker, Evan (Nelly) Smith, Mathew (Cassandra) Smith, Allie Smith, Hannah Smith, Cassidy Smith and Johnna Smith;  great-grandchildren, and one brother, Robert Lumsden of Columbus, Ms. She was preceded in death by husband Francis William Smith, brothers Avery, Oliver and John Lumsden, sister Alice Lumsden Brown and son-in law Jim Porto. Graveside services were March 13 at Lone Tree Cemetery by Essex Funeral Home.  www.essexfuneralhome.com

Edythe Lumsden Smith, or Medie, as she was known to family and friends, passed away on March 10, 2017, in Fayetteville, AR. Edythe was 90 years old. At age 19, Medie boarded a train to California to marry her hometown beau, Francis William... View Obituary & Service Information

The family of Mrs. Edythe Lumsden Smith created this Life Tributes page to make it easy to share your memories.

Edythe Lumsden Smith, or Medie, as she was known to family and...

Send flowers to the Smith family.