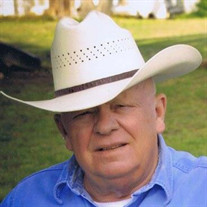 Elmer Loyd "Buddy" Dillion, 85, of DeWitt died September 6, 2019. He was born April 29, 1934 in DeWitt to Elmer Lee and Mary Lou Ray Dillion. Buddy retired from Kroger after working there for 31 years. He was an Army veteran and a longtime... View Obituary & Service Information

The family of Mr. Elmer Loyd "Buddy" Dillion created this Life Tributes page to make it easy to share your memories.

Send flowers to the Dillion family.