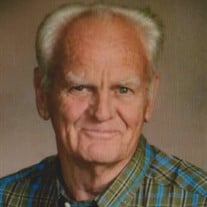 Floyd Omer Brickey, age 80, of Almyra passed away February 25, 2019 at his home. He was born July 5, 1938, the fourth of eight children to Tory and Eva (Hoosier) Brickey of Hickory Ridge, AR. He married our mom Mickey Ann Kittler, May 5, 1962 and they enjoyed 46 years of marriage before her death in 2008. Of this union 6 children, 18 grandchildren and 5 great grandchildren were born. Dad was a very skilled carpenter in his lifetime and educated himself in all things. He was always learning something new from foreign languages to his new inventions. Dad was highly talented in his workmanship, but he was most passionate about his faith. He was baptized June 28, 1961 into the General Assembly and Church of the Firstborn of which he was a mentor and teacher to many. He really loved serving the Lord and would go far and near preaching to try and encourage people to save their souls. He was fervent to study the Bible to gain knowledge and wisdom needed for the furtherance of the gospel. Dad was truly a loving grandfather to his grandkids. He took any opportunity to spend quality time with each of his children and grandchildren. He was to all his family a very kind and intelligent man. He counseled with true and honest advice when requested. He supported and encouraged us to always do our best. Dad loved our family gatherings and he showed he was thankful and blessed to have children and grandchildren that cherished him. He was preceded in death by his wife Mickey Ann, his daughter Betsy Jane, his grandson Jagger Cole Willis, his parents Tory and Eva Brickey, his brothers Bill Brickey of Redfield, AR and Vernon Brickey of White Hall, AR. He is survived by two daughters Reba and husband Mike Perry of Almyra and Mary Ann and husband Bradley Skinner of Rocky, OK; three sons Tory and wife Krisha Brickey of Hot Springs, Bobby and wife Tia Brickey of Stuttgart, and Farris and wife Crystal Brickey of Almyra; brothers Claude Brickey of West Memphis and Jerry Brickey of Redfield, AR; sisters Rachel Brickey, Carol Johnson, and Vera Jackson all of Pine Bluff; and all of his grandchildren, great grandchildren, and a host of nieces and nephews. Our family would like to give thanks to everyone that showed patience, kindness, and respect to our dad in his later years. For his church and neighbors that looked out and prayed for him, we want to give our sincere thanks. Visitation will be Friday, March 1 from 6:00 to 8:00 p.m. at Essex Funeral Home. Funeral services will be 2:00 p.m. March 2 at the General Assembly and Church of the Firstborn with burial following in Thompson Cemetery by Essex Funeral Home.

Floyd Omer Brickey, age 80, of Almyra passed away February 25, 2019 at his home. He was born July 5, 1938, the fourth of eight children to Tory and Eva (Hoosier) Brickey of Hickory Ridge, AR. He married our mom Mickey Ann Kittler, May 5, 1962... View Obituary & Service Information

The family of Mr. Floyd Omer Brickey created this Life Tributes page to make it easy to share your memories.

Send flowers to the Brickey family.