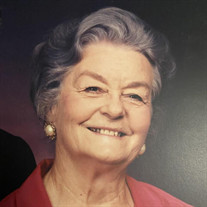 Glynna Fay Coit, age 90, passed peacefully into the loving arms of her Savior on December 1, 2021. Fay was born to Richard and Ruby Fisher in DeWitt, AR on September 21, 1931, and was the oldest of 10 children. She married the love of her life, Edward Eugene Coit on March 12, 1949, and was blessed with four children and raised her four youngest siblings after the loss of her parents. She was preceded in death by her husband, her daughter, Annette McFalls, her parents; son-In-law, Bob Keaton, her sisters Margaret Vaughan, Ivalo Butler, and Fredella Thompson; her brothers, Charles Fisher, Yvdonn Fisher, and Kenneth Fisher. She is lovingly remembered by her children, Delayne Keaton of Sheridan, AR; Glen Coit (Denise) of Littleton, CO, and Kevin Coit (LeeAnn McPherson) of Crocketts Bluff, AR; brothers, Lester Fisher (Donna) of Blanchard, OK, Walter Fisher of Springfield, AR, and Eddie Fisher of Moore, OK; son-in-law, Bill McFalls; Grandchildren, Rayeann Pierce (Gordon), Steven Coit (Patrick), Terah Ward, Matt Keaton (Janet), Doug Coit (April), Danyan Watkins, Amber Barlow (Chris), Lauren Jacobs (Drew) and Jarrid Coit (Bradee) and 17 great-grandchildren who lovingly called her GiGi, along with a host of nieces and nephews. She was lovingly known as Sister Fay or Aunt Fay to many in her community who adored her. Special thank you to her caregiver, Brittney Christian, and her wonderful Hospice team. She was an active member of the McAdams Road Church. Fay especially will be remembered for her infamous homemade rolls and her skills as a cook. She shared her love with everyone she met, and everyone was welcome at her table. “This is the day that the Lord hath made, let us rejoice and be glad in it” Psalm 118:24 was her favorite scripture, repeated often in her daily record and how she lived her life. A celebration of her life will be on Sunday, December 5, at 2 p.m. at McAdams Road Church and visitation, Saturday, December 4, 4-6 p.m. at Essex Funeral Home

Glynna Fay Coit, age 90, passed peacefully into the loving arms of her Savior on December 1, 2021. Fay was born to Richard and Ruby Fisher in DeWitt, AR on September 21, 1931, and was the oldest of 10 children. She married the love of her life,... View Obituary & Service Information

The family of Mrs. Glynna Fay Fisher Coit created this Life Tributes page to make it easy to share your memories.

Send flowers to the Coit family.