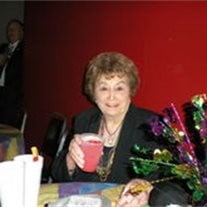 Gwendolyn Browning Alter, born April 3, 1924 to Letha and Enoch "Tean" Browning of Mt. Vernon, Arkansas passed away peacefully April 20, 2017  at the DeWitt Hospital.  She was a wonderful mother, grandmother, mother-in-law, neighbor, and friend. Gwen grew up working in her father's cotton gins in Conway and Faulkner counties.  She graduated from Mt. Vernon High School in 1941.  After graduating from high school she and a friend traveled to North Little Rock to live and work at the Jacksonville Powder Plant (during WWII).  She rode the bus each morning, weighed powder for ammunition, and returned by bus in the evening.  This job allowed her to save money for college.   The following year Gwen enrolled at the University of Arkansas where she majored in Home Economics and minored in Chemistry.  In December of 1946 she went on a blind date quail hunting with Charles Alter.  They were married three months later on February 28, 1947 and returned to the family farm in Dewitt during the summer of 1947. Family, Food, and Friends:  These words best describe Gwen Alter.  She was the consummate mother and homemaker.  Sewing, canning, cooking, gardening, and even helping out on the farm were all jobs that she performed well.  She loved to hunt but crappie fishing was her favorite sport of all.   She also enjoyed traveling with family and friends – visiting many states and countries abroad.   She was very proud of her children, grandchildren (11), and great grandchildren (14) – always present at births, birthday parties, graduations, and weddings. Gwen became the Dewitt School Food Service Director in 1965.  What was going to be an interim job became a 41 year career – retiring at age 81.  Food was a passion of Gwen's.  Her greatest pleasure was for family and friends to enjoy her dishes.  She became very active in the State Food Service organization serving as Treasurer for several years.  During her tenure with the State organization, she attended numerous national conventions all over the United States.   In 1971 she was selected from the Arkansas food service directors to attend Kansas State University for continuing instructional training.  Several years later she was chosen to attend the University of Oklahoma for further education on food service safety and food preparation. Dewitt has been Gwen's home for over 70 years.  Throughout her life, she participated in countless community projects.  She served as President of the PTA, the DeWitt Nursing Home Board for 21 years, and was very active in The Order of the Eastern Star.  She held many positions including Worthy Matron and sponsored the Rainbow Girls.  Even after retirement Gwen continued to comfort others with her food, serving on the Bereavement Committee at the First United Methodist Church where she had been a member for over six decades. Mrs. Alter was preceded in death by her parents; her husband of 56 years, Charles Alter;  a son, Jim Alter; one brother, Bentley Browning and one sister, Betty Goodloe.  She is survived by her two children John Alter (Dixie) of DeWitt, and Dena Alter Spears (Ronnie) of Jacksonville – 11 grandchildren and 14 great grandchildren.  She was greatly loved by all that knew her and will be forever missed. A Celebration of Life Service will be held at 11:00 a.m. Saturday, April 29 at First United Methodist Church of DeWitt, 608 S. Grandview Dr., DeWitt, AR 72042 with visitation from 10:00 to 11:00 a.m. In lieu of flowers the family requests memorials be made to the First United Methodist Church of Dewitt, 608 S. Grandview Dr., DeWitt, AR 72042.

The family of Mrs. Gwendolyn Browning Alter created this Life Tributes page to make it easy to share your memories.

Send flowers to the Alter family.