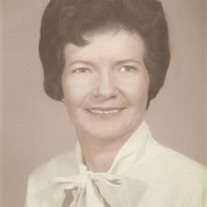 Hazel Beatrice Riley passed away peacefully at Hospice Home Care in Little Rock on December 29, 2017. She was born February 2, 1920 in Pampas, AR to Faultine and Viola Miller. She was preceded in death by her husband, Harvey C. Riley, Jr.; her parents; three brothers, Fritz, Emmett, and Clyde Miller; and her adoptive parents, J.T. Young and Dovie Young Hicks. She is survived by three daughters, Martha Ann Skelton (Walter) of Little Rock, Barbara Riley of Little Rock/Bayou Meto and Phyllis Orlicek (Steve) of Reydel. She was blessed with three grandchildren, Laura Skelton (Thomas Buford) of Seattle, Nicole Creason (Michael) of Stuttgart, and Jake Orlicek of Fayetteville and one great granddaughter, Elle Creason. She faced many adversities in her life, including the death of her parents within 6 weeks of each other when she was only 9, the death of her beloved adoptive father when she was 16 and the debilitating stoke her husband suffered at 53. A dear friend said of her, "Hazel just took whatever was handed to her and ran with it!" Hazel Riley was many things to many people: church pianist for some 30 years; owner of Young and Riley General Merchandise and both Riley Farms and Young and Riley Farms with her husband, a wonderful gardener; a fabulous cook, a loyal friend and a devoted and loving caregiver to her husband for 24 1/2 years after the doctor had given him only six months to live when he left the hospital. At 16 she graduated from Stuttgart High School. She was a lifelong member of Bayou Meto Methodist Church and an active member of the United Methodist Women. She will be greatly missed by the loving and grateful family she leaves behind to cherish her. The funeral service will be held Wednesday, January 3, 2018 at Bayou Meto United Methodist Church at 10 a.m. with burial to follow at Bayou Meto Cemetery. Visitation following the burial will be at the home of Steve and Phyllis Orlicek. Memorials may be made to Bayou Meto Methodist Church Memorial Fund, % Dixie Davis, 347 Wheeler Lake Rd., DeWitt, AR 72042; Bayou Meto Cemetery Fund, % Arkansas County Bank, P.O. Box 511, DeWitt, AR 72042 or Dana's House Inc., % Jon Hornbeck, 303 West Cross Street, DeWitt, AR 72042 or the charity of your choice.

Hazel Beatrice Riley passed away peacefully at Hospice Home Care in Little Rock on December 29, 2017. She was born February 2, 1920 in Pampas, AR to Faultine and Viola Miller. She was preceded in death by her husband, Harvey C. Riley, Jr.; her... View Obituary & Service Information

The family of Mrs. Hazel Beatrice Riley created this Life Tributes page to make it easy to share your memories.

Send flowers to the Riley family.