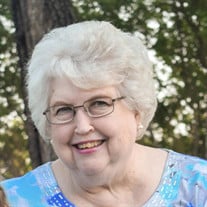 Iris LaNell Whitehead DeVore, 72, of Mountain Home, Ark., joined her Heavenly Father on August 18. She died from heart failure after contracting COVID19. Born on August 27, 1948 in Pine Bluff, Ark. to C.W. and Marie Whitehead, who preceded her in death, Iris was baptized in the Saline River at Vince Bluff and subsequently dedicated her life to the Lord. She was a fierce defender of her faith and family and most recently worshipped at East Side Baptist Church. A graduate of Woodlawn High School, Iris received her bachelors from what is now known as the University of Central Arkansas and her masters from Webster University. She had a diverse and varied career: teacher, extension agent, pre-school owner, farmer’s wife, homemaker, and mother all before she settled on a 30-year career in health information management. She retired from St. Bernards Medical Center of Jonesboro after 19 years in 2014. Iris worked to advance health information management as a profession by serving on several state and national boards and panels. Iris is survived by her loving husband Nealon “Ben”; son Micah of Brazoria, Tex., son Nealon of Brooklyn, New York, and son and daughter-in-law Jared and Deana of Gassville; and eight grandchildren from a beautiful, blended family, all of Gassville: Makaden, Benjamin, McKenzie, Chance, Chaesten, Elivia Mae, Baylee, and Jaxten. She’s further survived by sister Katy (Bill) Richardson of Bryant, and brother Charles Grover (Teresa) Whitehead of North Little Rock, and sister-in-law Virginia Platt of Mountain Home as well as three nieces: Sara Owen of Helena, Mont., Lisa (David) Boyle of Bryant, and Kelli (Beau) Glover of North Little Rock. She is also survived by dozens of strong Christian women and men who looked to her as their “spiritual matriarch.” A simple graveside service at DeWitt Cemetery will be held on Friday, August 27 at 10 a.m. An open-air reception for visitation will be held immediately following at the pavilion in DeWitt City Park. The family asks attendees to follow COVID protocols and encourages all to dress comfortably for the Arkansas Delta summer. In lieu of flowers, the family requests that donations be made in her memory to Arkansas Advocates for Children and Families.

The family of Mrs. Iris LaNell Whitehead DeVore created this Life Tributes page to make it easy to share your memories.

Send flowers to the DeVore family.