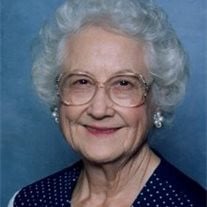 DEWITT--JESSIE MAE PURDY ADAMS FLOWERS, 89, long-time resident of DeWitt, Arkansas, passed away April 7, 2014. She was born in Point Deluce Township in Arkansas County to Jessie and Mavie Purdy on May 10, 1924. Of her siblings, she is survived by beloved brother Glendon, "Buck", Purdy of McGehee. Deceased are George Warren and infant sister Vertie. Especially close were aunts, Tressie Rhodes of Hazen and the late Agnes Bowen. Her husband of forty years, Elvis Flowers, and former husband Elmer Adams preceded her in death. She is survived by two daughters, Donna Adams Parker of Little Rock and Jan Adams-Byers and her husband Howard Byers of West Lafayette, Indiana; granddaughter Angela Parker and her husband David Sink of Little Rock; grandson Wade Parker and his wife, Elaine of Lewistown, Pennsylvania; and, granddaughter Courtney Byers, of Coconut Creek, Florida. Others remaining to share her memory are great-granddaughter Rachael Cunningham and great-great-grandson Sawyer Bradley of Bryant, and nephews and nieces Randy Purdy of DeWitt, Glenda Terry and her husband Ricky of McGehee, Rachelle McCarty and her husband Tim of Redfield, Nancy Singleton and her husband James of Hope, Donnie Ray Purdy and his wife Susie of McGehee, and Ricky Purdy of DeWitt. She is remembered fondly by special friends and relatives, Brenda Byers, Judy Kay Snyder, Bernice Gray, Kathryn Trussell, Louise Mannis, Phyllis Vansandt, Holly Terry, and Jason Bradley. Jessie Mae lived an active life in DeWitt. She taught at the Williams & Trussell one-room schoolhouse at Point Deluce, worked for the J.W. Porter Lumber Co., and was a long-time employee in retail sales. She was a beloved Sunday School teacher at Landmark Baptist Church and was a charter member of Unity Missionary Baptist Church. She traveled extensively with husband Elvis, including a car trip to Alaska and many motorcycle and Airstream journeys to camping grounds in Arkansas and surrounding states. She was an accomplished seamstress and enjoyed selling arts and crafts that she and her friends created. Visitation is scheduled for 6:00-8:00 on Wednesday evening, April 9, at Essex Funeral Home in DeWitt. Services will be held at Essex Chapel at 2:30 on Thursday, April 10. Donations in Jessie Mae's memory may be sent to St. Jude's Children's Research Hospital.

DEWITT--JESSIE MAE PURDY ADAMS FLOWERS, 89, long-time resident of DeWitt, Arkansas, passed away April 7, 2014. She was born in Point Deluce Township in Arkansas County to Jessie and Mavie Purdy on May 10, 1924. Of her siblings, she is survived... View Obituary & Service Information

The family of Jessie Mae Purdy Adams Flowers created this Life Tributes page to make it easy to share your memories.