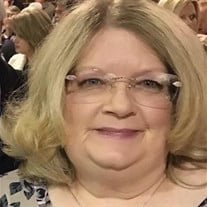 Joy Marie Thorne Lopez, of Gillett, Arkansas died suddenly February 2, 2019 at home. She was born April 18, 1953, at US Naval Hospital, Great Lakes, IL to the late Joyce LaVerne Gibson and James Lester "Jim" Thorne. She is proceeded in death by brothers, Charles Patrick"Chuck" Thorne, and Lester Homer "Butch" Thorne. She is survived by her daughter, Heather Kristine Means Dodson, of Seattle Washington, her dear friends of over 20 years Vera Reed Heath and husband, Rocky Cunningham of Gillett, and new found friends Amanda and Clay Lemonds. After high school graduation she was accepted and sworn into the US Naval Academy along side her brother Chuck, only to be discharged within a few months due to being allergic to the 100% wool Navy dress blue uniforms. Joy was a well traveled woman having been married twice to two military men, she had lived in Texas, Washington, Idaho, the United Kingdom, Germany, and Arkansas just to name a few. She had experienced things few individuals get to do such as see Princess Diana in person close up. While stationed in Germany she and daughter Heather happened to be in Berlin in 1990 and saw the Berlin wall fall, keeping small pieces as mementos. Prior to her back injury, she was an avid golfer, reader, loved dancing, walking the shopping malls, loved San Antonio Spurs basketball and Dallas Cowboys football. She worked as a Federal Employee for the Department of the Air Force for almost 30 years as a Human Resources Specialist. Joy moved to Gillett in 2014 to be close to Vera and Rocky and quickly grew to love the friendliness and slow paced life of living in Arkansas County. Joy's wishes were to be cremated. Arrangements were provided by Essex Funeral Home, DeWitt Arkansas. A memorial service will be held in the spring with her ashes to be interned in Gillett Cemetery. Condolences may be made by visiting www.essexfuneralhome.com.

The family of Ms. Joy Marie Thorne Lopez created this Life Tributes page to make it easy to share your memories.

Send flowers to the Lopez family.