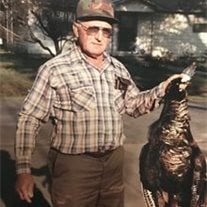 Justin Mathews Wallace, Sr., 87 of Gillett passed away March 1. He was born July 31, 1930 in Gillett to Leonard and Beulah Chadwick Wallace. Justin was a farmer and surveyor. He married Betty Hightower on May 7, 1954. He was a member of First... View Obituary & Service Information

The family of Mr. Justin Mathews Wallace, Sr. created this Life Tributes page to make it easy to share your memories.

Send flowers to the Wallace, family.