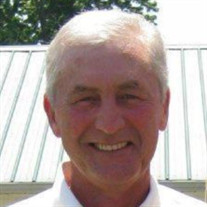 Lonnie Gale Stoddard, age 68, of DeWitt, AR passed away December 24, 2020 with his family by his side. He was born April 29, 1952 in Webb, OK to Vernie Bliss and Ruth Elizabeth Stoddard. He graduated from Buffalo High School in Buffalo, MO in 1970. He moved to DeWitt in 1973. In 1974 married Lou Anna Davis. To this union, two children, Brice Deverne and Tawana Gayle, were born. He later married Jane Sallee Butler in 1989 and gained a step son, Hunter Allen Butler. Lonnie dedicated 43 years of mechanic service to Case International, currently Heritage Ag, serving farmers across the county. In 2011, he was awarded "Best of DeWitt Employee of the Year" for his dedication and commitment to the community. He retired on April 25, 2018. Outside of work, he enjoyed hunting, fishing, and spending time with his grandchildren. He was baptized in 1968, at age 16, into the General Assembly and Church of the Firstborn in Louisburg, MO. Lonnie was preceded in death by his parents Vernie and Ruth Stoddard, his first wife Ethel Hamm Stoddard and unborn child, his son Brice Stoddard, his step son Hunter Butler, six brothers Nelson, Leland, Dean, Alvin, Doug, and Ronald, and one sister Lou Ella Stackhouse. He is survived by his wife of 31 years Jane Stoddard of DeWitt, his daughter Tawana Watson (Dean) of St. Charles, three granddaughters Lauren Murray (Slade) and Madalyne Stoddard both of DeWitt, and Ava Watson of St. Charles, five great grandchildren Jaxon Hearn, Malcolm and Sawyer Murray, and Bricelyne and Autumn Matthews, three sister Verma Ratliff of Oklahoma, Eileene Crusha of Missouri, and Janice Jones of Oklahoma, and a host of nieces, nephews, family, and friends. Funeral services will be 2:00 pm at Essex Funeral Home December 28. Burial will follow in Thompson Cemetery. Memorials may be made to DeWitt Hospital and Nursing Home, P.O. Box 32, DeWitt, AR 72042 or to the Leukemia and Lymphoma Society, P.O. Box 98018, Washington, D.C. 20090-8018.

Lonnie Gale Stoddard, age 68, of DeWitt, AR passed away December 24, 2020 with his family by his side. He was born April 29, 1952 in Webb, OK to Vernie Bliss and Ruth Elizabeth Stoddard. He graduated from Buffalo High School in Buffalo,... View Obituary & Service Information

The family of Mr. Lonnie Gale Stoddard created this Life Tributes page to make it easy to share your memories.

Send flowers to the Stoddard family.