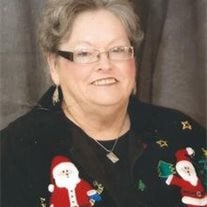 DeWitt- Mable Ward Maugans, 72, of DeWitt died June 1, 2015. She was born January 11, 1943 in Stuttgart to Earl and Bertha Chapman Ward who preceded her in death. Also preceding her were a son, Donnie Earl Travis, brother, Gene Ward and sister,... View Obituary & Service Information

The family of Mable Ward Maugans created this Life Tributes page to make it easy to share your memories.

Send flowers to the Maugans family.