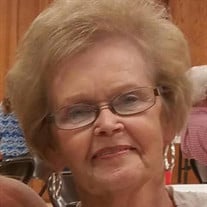 Martha Annette Williams Grantham, lovingly known as “Granette” by many, passed away on Tuesday, October 19, 2021 while in the Dewitt City Hospital, and is now rejoicing with her Lord God in Heaven. Mrs. Annette was born on April 5,1940 and lived a full life in her 81 years on Earth. She left a rich and profound legacy for her family, friends, church and community. She was an extraordinary example of Christ’s love to numerous friends and an iconic matriarch to an adoring family. She was preceded in death by her “one and only”, her husband of 50 years, Billy Warren Grantham of Tichnor, her devoted mother and father, Henry and Opal Williams of Stuttgart, and her only sister, Dorothy Williams Powell, of Stuttgart. Mrs. Annette was a lifelong resident of Arkansas County. Born and raised in Stuttgart, she graduated from Stuttgart High before marrying Billy on December 26, 1956, and moving to Tichnor. The couple spent many happy years working on the three hundred acre family farm and raising three sons. They were active in charities, clubs and community groups in Tichnor, Gillett and Dewitt. Mrs. Annette was a member of Campshed Methodist Church and the Gillett United Methodist Church. Mrs. Annette was known for her noble character, true class and Southern charm. She was such a pleasure to be around and people were naturally drawn to her sweet demeanor and calm presence. She was never one to utter harsh words, spread gossip or make light of others hardships. She was a prayerful woman who encouraged and uplifted all those who considered her a friend. She was a great listener who paid attention to detail, shied away from compliments and directed that all glory and honor go to God. Mrs. Annette loved to cheer on her absolute all-time favorite team, the Dallas Cowboys, either in person or in front of the television every Sunday afternoon. She enjoyed tending to her flower beds, going on new adventures while travelling across America, and attending anything and everything involving her grandkids and great-grandkids. When asked, she would always reply, “Yes, let's go! I want to see my precious babies!” Granette was one of the hardest working women on the Little Prairie. She would normally be up before dawn, walk for exercise at Merrisach Park (with J’laine), make lunch for the men, drive grain carts or big trucks all day, before sewing, cleaning, canning, baking, doing laundry and studying the Bible well into the night. She was salt of the Earth and a woman of noble character, as found in Proverbs 31. Her favorite Bible verse, serving as her lifelong motto was, “Rejoice always, pray without ceasing, give thanks in all circumstances..” is found in 1 Thessalonians 5:16. Her family considered her as the epitome of love, as she was never one to boast, brag, belittle or berate anyone at any time. She was truly a still magnolia, containing unbelievable mental fortitude and strength, while physically tough as nails, but exquisitely beautiful and delicate in her disposition and sincere, hospitable manner. Mrs. Annette is survived by her three sons, eight grandchildren, and ten great-grandchildren, along with one on the way. Her oldest son is Randy, Grantham of Gillett. His family includes wife of 40 years, Darla Sullivan Grantham, and two daughters, Christina and Bernie Crowley of Hernando, MS, their son Bear and daughter Ginny; Katie and Matthew Lehner of Little Rock and son George and daughter Madison. Her second son is Jim Grantham of Tichnor. His family includes wife of 39 years, Annette Gordon Grantham, and three children, Stacey and Nolan McEntire of Heber Springs, and sons, James, Cameron and Liam; Dex and Karley Grantham of Greenbrier and twin sons, William and Benjamin; and Megan and Hunter Henderson of Stuttgart and son Emmitt, and sister, due in January of 2022. Her youngest son is Jason Grantham of Tichnor. His family includes wife of 21 years, Melissa Rush Grantham, and their girls, Mary-Claire, Chloe-Belle, and Ava-Grace. Visitation will be held at 1:00 pm on Thursday, October 21 with a funeral to follow at 2:00 at the Gillett United Methodist Church. She will be buried at Bonners Chapel Cemetery (New Zion Church) in Tichnor. Memorials may be made to Bonners Chapel Cemetery, c/o Ja Chambliss, 1121 Rollison Drive, Dewitt, AR 72042. On behalf of the family, thank you for joining us as we celebrate the amazing life and legacy of our beloved Granette. May her life be a testament to the power and glory of God Almighty.

Martha Annette Williams Grantham, lovingly known as &#8220;Granette&#8221; by many, passed away on Tuesday, October 19, 2021 while in the Dewitt City Hospital, and is now rejoicing with her Lord God in Heaven. Mrs. Annette was born on April... View Obituary & Service Information

The family of Mrs. Martha Annette Williams Grantham created this Life Tributes page to make it easy to share your memories.

Send flowers to the Grantham family.