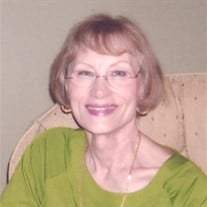 Paulette Moore Case was born in Humphrey, Arkansas on November 18th, 1944 and died at home with her family around her in Casscoe, Arkansas on July 15th, 2019. She attended both Humphrey and Traskwood Elementary Schools, and graduated from Humphrey High School in 1962. She remained friends with many of her classmates throughout her life, affectionately referring to them as “the girls”. Paulette spent many years as a homemaker, caring for her children, as well as providing childcare in her home, before returning to school and graduating from the University of Arkansas with a Bachelor of Science in Nursing in 1989. She worked as a registered nurse for several years before returning to school at Emery University in Atlanta to obtain a certification in wound and ostomy care. Places of nursing employment included the VA hospital in North Little Rock; ABC Home Care in Hazen, Lonoke, and England; Rose Care Center of Stuttgart; and Stuttgart Memorial Hospital. After retiring from nursing, she worked at the Arkansas County Assessor’s office before retiring to care for sick relatives. She lived in the Casscoe community for 19 years and enjoyed helping with Vacation Bible School at New Salem Missionary Baptist Church each summer. Prior to moving to Casscoe, she was a long time resident of Stuttgart. She is preceded by her parents, Paul and Jewel Moore; sister and brother-in-law, Miriam and Gene Johnson; sister and brother-in-law, Mary and Bob Davis; brother, Harvey Reeves; and brother-in-law, Barry Bowen. She is survived by her husband of 57 years, William Melvin Case; her children Valerie and Van Beck, Andrea Smith, and David Case; her grandchildren, Benjamin Smith and Dorrie Matthews, Emily Smith, Addy Mims, and Rachael and Maren Beck; sister, Emma Jean Bowen; sister-in-law, Juanita Ford; sister-in-law, Jane Reeves; brother-in-law, Marvin, and sister-in-law and special friend, Mildred Case; as well as cousins, nieces, nephews, and friends. A memorial service will be held at New Salem Missionary Baptist Church at 254 Cooks Lake Road in Casscoe, Arkansas on Saturday, August 10th, 2019, at 11:30. In lieu of flowers, the family asks that you donate to the charity of your choice.

Paulette Moore Case was born in Humphrey, Arkansas on November 18th, 1944 and died at home with her family around her in Casscoe, Arkansas on July 15th, 2019. She attended both Humphrey and Traskwood Elementary Schools, and graduated from Humphrey... View Obituary & Service Information

The family of Mrs. Paulette Moore Case created this Life Tributes page to make it easy to share your memories.

Paulette Moore Case was born in Humphrey, Arkansas on November...

Send flowers to the Case family.