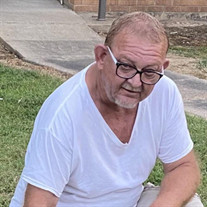 Richard Neal "Rick" Mannis, 63, of DeWitt passed away August 14, 2021. He was born November 12, 1957 in DeWitt To Henry Chester and Treva May Mills Mannis. Rick was a member of Forks LaGrue Missionary Baptist Church and was an ash plant... View Obituary & Service Information

The family of Mr. Richard Neal "Rick" Mannis created this Life Tributes page to make it easy to share your memories.

Send flowers to the Mannis family.