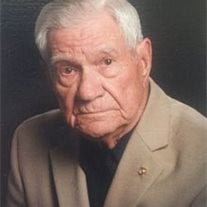 Shelby Gordon Burnett, Jr ,96, of DeWitt was born June 4,1920 to the late Shelby Gordon Burnett, Sr and Mayme McKenzie Burnett. He died August 19,2016 surrounded by the love of his family and friends. He graduated from DeWitt High School in 1938 and Arkansas State Teachers College in 1942. He joined the Marine Corps in 1942 and married Dorothy Barnes of Wilson, NC on November 27, 1943. He was sent to the South Pacific and served there in the Supply Service until the end of WWII. He was recalled to serve two additional years at Cherry Point, NC in 1952. He was retired as Major USMC in 1964. In 1954, he moved his family to Aiken ,SC where he worked as a Health Physics inspector at the nuclear reactor located at the Savannah River Plant. In 1964, he returned to DeWitt where he established a one man plumbing business holding the slogan of " Good AS Any -- Better-N Some." He retired from plumbing in 2002 a few months before the death of his wife, Dorothy on December 16, 2002. He lived in DeWitt until a fall in January 2015 prompted his family to move him to Little Rock to assist with his care He was preceded in death by his brother, Lemuel Burnett, his sister Magdalene Moffatt and daughter Delores Fox. He is survived by his sister, Bonnie Whitlow of Dallas Texas, his son in law, Charles Robert Fox of DeWitt, his son Bobby Burnett (Betty) of New Bern NC, daughter Rebecca Bryant (Mike) of Bryant, and daughter Ching Hearnsberger of Little Rock. He is survived by numerous nieces, nephews, grandchildren, great grandchildren and great, great grandchildren. A celebration of his life will be planned and announced at a later date. It was his wish that friends and acquaintances, who so desired , should come together where libations, both hard and soft, will be served in memory of him! Special thanks to those caregivers at House of Three who loved and cared for him as if he was their own. To Gentiva Hospice whose guidance and care was more than we could have hoped for. And To "James", his new found friend who was with him from day one to help him maintain his dignity and granted him reprieve from the otherwise mundane activities of his daily care plan. He was a special man that lived his life in a way that made others love him and laugh with him. He will be missed. In lieu of flowers, memorials may be made to the First United Methodist Church, 608 S. Grandview Dr., DeWitt, Arkansas 72042. There will be celebration of life gathering at the home of Vivian Meins on Saturday, September 10 from 5-8 p.m.

The family of Mr. Shelby Gordon Burnett, Jr. created this Life Tributes page to make it easy to share your memories.

Send flowers to the Burnett, family.