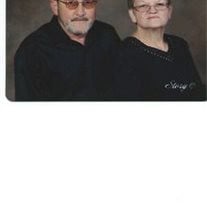 Timothy Wayne West went to be with the Lord on May 26, 2014. He was born November 28, 1952 in Dallas, TX, to J.C. and Jamie Branstetter West. He graduated from St. Charles High School in 1972. Following graduation, he joined the Arkansas Army National Guard on a part time basis. He married the love of his life, Karen Jo Ellenburg on June 8, 1973. In 1977, Tim and Karen welcomed their only daughter Tena Kay West Stone. Several years later, Tim became employed full time with the Arkansas Army National Guard until his retirement in 2001. Tim was an avid hunter and fisherman, until his illness prevented him from enjoying it. He loved any kind of hunting, but turkey hunting was his favorite. He was a member of Faith Baptist Church of DeWitt, American Legion, 40 et 8, and the Little Lagrue Hunting Club of DeWitt. Tim was preceded in death by his parents and two brothers, John Carroll West and Billy Jack West. He is survived by his wife of almost 41 years, Karen Jo; daughter Tena Kay West Stone (James); his precious granddaughter, Madelyn Grace; two brothers, George (Pam) West of Rudy, AR, and Gary (Virginia) West of St. Charles, AR; nieces Jamie West, Bobbye Jo Moncrief, and Elizabeth West; nephew Zack West; four great nieces and one great nephew; and two special "four legged" kids, LiLo and Belle. Tim was loved by all who met him. He made a huge impact on many of his fellow soldiers in the National Guard. He loved serving his country. His greatest love and joy was when his only granddaughter was born in September of 2013. Tim was so proud and loved Madelyn Grace very much. He was so excited that he was able to see her born and cherished each moment that he was with her these past eight months. Memorials may be made to DeWitt City Hospital or donor's choice.

Timothy Wayne West went to be with the Lord on May 26, 2014. He was born November 28, 1952 in Dallas, TX, to J.C. and Jamie Branstetter West. He graduated from St. Charles High School in 1972. Following graduation, he joined the Arkansas Army... View Obituary & Service Information

The family of Mr. Timothy Wayne West created this Life Tributes page to make it easy to share your memories.

Send flowers to the West family.