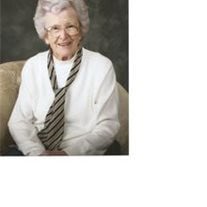 Zada Hargrove Simpson, "Grammy" age 96 of DeWitt gained her heavenly angel wings on February 24, 2016. She was a true angel on earth and is now, a shining star in Heaven. Zada was born January 20, 1920 to Gertrude (Bouch) and Archie N. Hargrove. She attended school at New Providence Turley, in a one room school house. At age 16, she attended State Teacher's College in Conway, earning her degree in education, which was a true feat at that time. She began her teaching career in St. Charles, AR in 1938. On, May 4. 1939, she married her one and only love, John H. Simpson. John was drafted during World War II in 1942, where they were stationed in New York City. Zada was assigned to work in the mail census room, where they checked all mail for possible spy information. After, returning from New York, they moved to her family farm and he began farming, while she worked as Principal at Almyra, AR until they were blessed with their first child via adoption. From that point on, her children became her entire life. Zada and Johnny were founding members of Lodges Corner United Methodist Church where she served as organist and Sunday school teacher. She was an accredited instructor District and Conference teaching labs for the Methodist Church; Member of UMW (United Methodist Women), Arkansas Post DAR; and former member of GFWC Mother's Club of DeWitt. She was very active in all of her organizations when able. After the loss of her husband in 1977, she became manager of Hargrove/Simpson farms and after the passing of her Mother, she became primary care taker for her brother whom was disabled. Zada was "Grammy" to all that knew her. She loved her children and grandchildren, along with all of their friends more than life. Never missing an event and always putting them first. Her doors where always open to anyone who needed a home or place to stay, and she took care of everyone. She was an amazing gift to this world and the world will not be the same without her. Zada is proceeded in death by her husband, John H. Simpson, her parents Gertrude and Archie Hargrove, her son James H. Simpson, and brother Archie "Junior" Hargrove. She is survived by her dearly loved daughter Mary Kay and Ken Dempsey of Gillett, her grandchildren Keith and Vanessa West of Pacific Palisades, CA, Michelle (West) and J.D. Hollimon, B.J. and Alison West all of DeWitt, and her great-grandchildren and her prides: Carrington and Carson Hollimon, Caitlin and Connor West, and Caroline West. Visitation will be held Friday, February 26 from 5-7p.m. at Essex Funeral Home in DeWitt. Service celebrating her life, Saturday, February 27, 2016 at Lodges Corner United Methodist Church at 2 p.m.. Memorial may be made to Arkansas Rice Depot, 3801 W. 65th St., Little Rock, AR 72209, as her passion of rice farming or First United Methodist Church of DeWitt, 608 S. Grandview, DeWitt, AR 72042 for her love of her great grandchildren and the pride of their involvement of the Methodist Church.

Zada Hargrove Simpson, "Grammy" age 96 of DeWitt gained her heavenly angel wings on February 24, 2016. She was a true angel on earth and is now, a shining star in Heaven. Zada was born January 20, 1920 to Gertrude (Bouch) and Archie N. Hargrove.... View Obituary & Service Information

The family of Mrs. Zada Hargrove Simpson created this Life Tributes page to make it easy to share your memories.

Send flowers to the Simpson family.